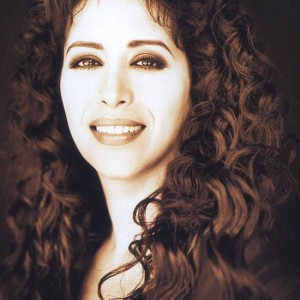 BACKGROUND: Ofra Haza was born November 19, 1957 in Israel and raised in a traditional Yemenite home. Ofra joined a theatre group at 12 and recorded several albums with them, eventually leaving to start a solo career managed by the founder of the group, Bezalel Aloni.

Her first three solo albums yielded many well-received singles, including the #1 hit “Shir “, but her career reached a new level when she placed second in the Eurovision Song Contest in 1983 with “Chai.” She became a hugely popular singer in the Middle East, comparable to Madonna’s popularity in America.

Ofra received international recognition and praise in 1988 with “Im Nin’ Alu” (a reworked version of a track from an earlier album, Yemenite Songs). Her subsequent albums garnered critical acclaim and even a Grammy nomination (for 1992’s Kirya). Her music was strongly influenced by her Yemenite roots and Israeli culture but also adeptly incorporated elements from other cultures, resulting in a compelling fusion of world music.

1997 saw the release of Ofra’s final album (Ofra Haza). Sadly, Ofra passed away on February 23, 2000, reportedly due to organ failure or pneumonia as a result of complications from AIDS. Israel mourned the death of one of its greatest and most significant icons. Then-Prime Minister of Israel Ehud Barak noted, “Ofra emerged from the Hatikvah slums to reach the peak of Israeli culture. She has left a mark on us all.”

MY THOUGHTS: I adore Ofra Haza. Her voice is gorgeous and her music, like I said above, is a wonderful blend of Israeli rhythms and melodies and world music elements. “Show Me” was the first Ofra Haza song I ever heard and to this day, I can still remember thinking “This is something special” as I listened to it. Her 1997 album, from which “Show Me” is taken, remains my favorite, and I think that “Show Me” is a great representative of that album’s sound. If you like what you hear here, you might want to pick up her 1997 album, but to get a truer sense of her career you should pick up one of her earlier works like Adama or Desert Wind. Ofra Haza is an absolutely amazing album, but it is a bit more dance-influenced than her previous works.

“Show Me” was the only single released from the album and was backed by two remixes. The drum’n’bass-ish X-Citement mix is all right, but never really goes anywhere. It also speeds up the vocals to the point that they sound, well, sped up – kinda choppy in some places.

The TE mix doesn’t use all the vocals, which happens sometimes in their mixes. Rather, phrases and syllables are taken and played around with. The synth strings (I’m guessing they’re synths?) and deep bass sweep across the track amidst swirling synth effects and trance beats. When the main string/synth riff comes in, oh man. Just listen, it’s fantastic. :)