So The Verve released Forth on August 26, and I’ve listened to it a few times now. I was pretty psyched about this album, and I think it delivered. It’s not mind-blowing, and it meanders a bit sometimes, but when it’s good it’s glorious. 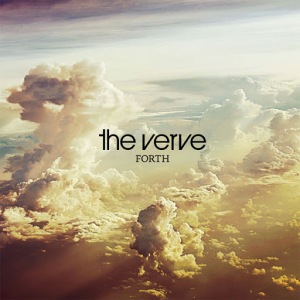 Things start off swimmingly with “Sit And Wonder.” I adore this song. It’s the sort of song you get lost in – there’s tons of reverb on the guitars and Richard Ashcroft’s vocals, making for an epic, atmospheric sound. Love love love the chorus. If you only download one song from Forth, make it “Sit And Wonder.”

What can I say about “Love Is Noise”? It’s one of my favorite songs of the summer (along with Rihanna’s “Disturbia”) and it’s just plain great. Strangely enough, its ultra-catchy pop-ness sounds kind of out of place on Forth‘s collection of spaced-out jams and rockers. “Rather Be” comes next and the chord progression or whatever calls to mind Richard Ashcroft’s solo singles “Break The Night With Colour” and “Check The Meaning”. I love the sentiment of the song – “I’d rather be here than anywhere, is there anywhere better than here?” Ashcroft sings, probably of a relationship. Cool beans.

“Judas” is next and has a tripped-out feel. The guitars are nice and Richard Ashcroft’s voice is expressive and somewhat relaxing, actually, but this song marks the beginning of some serious meandering. And by “meandering” I mean that the song lasts for what feels like forever and doesn’t seem to go anywhere. The next song is the best example of this. I’ll come right out and say that I don’t like “Numbness” at all. Not one bit. It’s just not good. And it goes on for six and a half minutes. If you’re into shoegaze style music, then you might like “Numbness.” Otherwise, you’ll probably fall asleep halfway into it.

I’m reminded of “I Get My Beat” (a solo Richard Ashcroft number) when I listen to “I See Houses”, and though I do like “I See Houses,” I like “I Get My Beat” a lot more. “I See Houses” brings us out of the doldrums of “Numbness” but it’s “Noise Epic” that blasts away any lingering memories of that mess. It’s a little over 8 minutes long but it never feels that way. Awesome guitar work, cool vocals, and bangin’ drums make for a song that really lives up to its name.

“Valium Skies” is a really pretty little song (the shortest on the album) that isn’t quite memorable, but every time I listen to it I really love it. “Columbo,” I have to be honest, didn’t really make any impression on me. It’s another shoegaze style bit of meandering. All is forgiven, though, with “Appalachian Springs.” The album started off strong and ends strong with an equally epic tune. It’s another atmospheric song that sounds excellent in headphones, where you can pick out all the little lovely guitar flourishes. If only more albums ended like this!

Go check out Forth on iTunes! :)

The Verve’s video for new single “Love Is Noise” is on their MySpace. It’s cinematic but, unfortunately, a bit dull… I think the feel of the song called for something a bit bigger, more epic, if that makes sense! Still, it’s a quality video, just kinda forgettable. :(

Wooo! The Verve are back with “Love Is Noise” (which you can hear on their MySpace), the first single from their forthcoming album. It’s great stuff. It’s quite a bit different from their past output – it leans closer to pop/rock than shoegaze, and I think it’s fab!

Sorry for this rather short and silly post – but I’m loving this song so much, I just had to share! :)

There are a few albums that will be released over the summer and into the fall that I’m excited about. Here are my thoughts:

I’m sure other new albums will come about that I’ll love, but these are the ones I’m marking my calendar for! :)

Whoa! I haven’t posted in forever! To try and make up for my blogging negligence, here are a few albums and such that you might like. :)