Helena Paparizou is probably best known for winning Eurovision 2005 for Greece with “My Number One,” but make no mistake – she’s no one trick pony! She released her latest album, Vrisko To Logo Na Zo, on June 12 and it’s great! It leans more toward rock than her last albums did, and the guitar-heavy arrangements suit her voice wonderfully.

The midtempo rocker “I Kardia Sou Petra” starts the album off with the perfect mix of an anthem-like chorus, addictive rhythms, and grinding guitars. No wonder it’s the album’s second single! :) “Kita Brosta” is a bit slower, rather like a ballad, with yearning vocals from Helena. The album’s first single “Porta Gia Ton Ourano” storms up next, with some beautiful strings and a barrage of guitars. “I Kardia Sou Petra” is my favorite of the two singles, but “Porta Gia Ton Ourano” is still fab.

“Pios” pops up next with a sort of R’n’B-style rock beat and is a nice bit of “power pop.” The shuffling “Agapi San Listia” manages to be mellow and funky at the same time – this is a breezy, beach-y summer track. Good stuff! The next track, “Mathe Prota N’Agapas,” starts off hauntingly a cappella, then piano, strings, and percussion come in to turn the track into a sweet ballad. Not my fave track on the album but fine just the same. 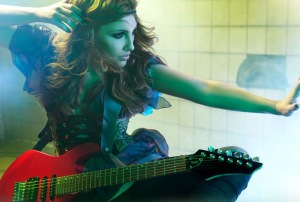 “Eisai I Foni” has great walloping drums and grand vocals from Helena. “Pirotehnimata” comes close to being a dance track, with synths, spoken samples, and a driving beat. It sounds kind of outdated and really doesn’t fit into the rest of the album. It would be neat to hear an entire album of dance tunes from Helena, though!

“Do Tha Me Do” has a cool beat and would do well on the radio, I think. “Papeles Mohados” is a duet with Chambao (I’ve no idea who that is!) and is a fun, upbeat number with lots of Greek rhythms. House organs kick “To’Heis I De To’Heis” off, and then it moves into Greek pop-rock. Great track, and the instrumentation kind of reminds me of Dannii Minogue’s “Sunrise” – which can only be a good thing! :)

The album closes with “Mi Mou Milas Gi’Antio,” a somber, acoustic guitar and string-based song with excellent percussion. This is a solid, beautiful track. The bonus track, “To Fili Tis Zois,” is another guitar-driven midtempo rocker with a catchy chorus. I think the album works best with “Mi Mou Milas Gi’Antio” as the last track but bonus tracks are always good to have. :)

Overall, I’d have liked to hear one or two more uptempo tracks, but really, it’s nice to hear Helena Paparizou singing anything – what a great voice! All in all, a nifty album!