It’s about time I reviewed something! ;)

Girls Aloud. They’re simply fabulous. There is no doubt in my mind that they are the number one pop girl group in the world right now. After last year’s hits-yielding Tangled Up and this year’s sensational tour, I was eagerly anticipating their November 3 release of Out Of Control. Did the girls live up to the excitement? Well of course they did, you silly goose! 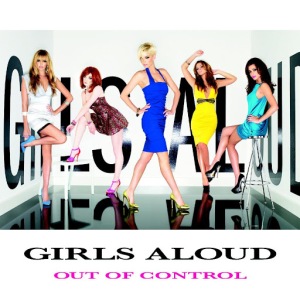 The album starts with the ultra-poppy Sixties throwback, “The Promise,” all cheerfully squawking horns and a shuffling beat. The album version differs a bit from the single version in that it has more of an intro and and outro and thus sounds more “complete.” The album’s most-hyped track comes next, the Pet Shop Boys-penned “The Loving Kind.” Now, to be totally honest, I was a little disappointed with this one. It is definitely very PSB-sounding – from the yearning “I’ll do anything, sing you songs that lovers sing” bit to the lyrics (which are a sight better than the admittedly rather odd lyrics the girls sometimes sing. I mean, “Let’s go Eskimo”?) – which is a positive, but it just feels like a flat “Call The Shots.” That said, it really does grow on you. I went from being neutral about the song to loving it, so have a listen and decide for yourself! :)

“Rolling Back The Rivers In Time” rolls up next and is a bit of a different sound for Girls Aloud. The song is a pretty, gentle shuffle of melodic guitar and light beats. One of my favorite songs on the album comes next – “Love Is The Key”! It opens with a Gregorian choir or something and quickly moves into a down-and-dirty, blues-y groove. It’s like someone took the best parts of “Wild Horses” and “Waiting” (from Chemistry) and added on a cool synth hook! After that bit of perfection, we move on to the beautifully bittersweet portion of the album that starts with “Turn To Stone.” Percolating synths punctuate this chilled electro tune. What you must listen out for are the lovely vocal melodies here.

The album’s highlight, and another of my fave tracks, is “Untouchable.” It’s over six and a half minutes long, and yet you never want it to end! Delicate and driven at the same time, “Untouchable” is packed full of melodic flourishes, sweet vocals, and even hilarious yet poignant lyrics, like “beautiful robots dancing alone.” In all seriousness, though, this is a wonderful song. Just heavenly.

You kind of thud back to earth with the opening vocoded vocal of “Fix Me Up,” though – “sex me up, ‘cos I’m feeling like I want you”! And somehow, this actually works! The girls get down-and-dirty again – emphasis on the dirty! – with this slow-burning tune. It’s like the “Watch Me Go” or “Fling” of 2008! The cool electro stomper “Love is Pain” follows, and is kind of like “Turn To Stone Part 2” with its aching chorus. “Miss You Bow Wow” comes up next and is instantly catchy – “everybody love love loves everybody…!” It feels a little like several songs in one – and that’s what makes it so much fun! Love the “I rememberrrrrrr” bit!

“Revolution In The Head” is the girls’ attempt at dancehall-style reggae – and you’d never believe it, but it really works! This song gets stuck in head so often now! I really like the deep synth that starts the song off, and the handclaps and beats are infectious. We get a classic Girls Aloud sound with the next track, “Live In The Country.” And no, I’m not talking about the animal noises! ;) This is perfect, fast-paced pop with uniquely British lyrics about getting rich and living in the country, where you can act crazy and the locals will just call you “eccentric”! This song really should have been the album closer, because it is a fab track. The actual final song, “We Wanna Party,” while a fun rock-infused tune, would have been better used as a bonus track. There’s nothing wrong with the song – it’s just not quite as “special” as the rest of the songs on the album. But it still ends the album on an energetic, party-ready note, so I can’t complain too much! :)

Is this my new favorite Girls Aloud album? Well, I think it’s tied with Chemistry for the #1 spot! Yes, Out Of Control is really that good. :) Buy the album on 7Digital or Amazon.co.uk! :)

It looks like the end of the year is shaping up to be the best part of 2008, music-wise! :) There are several upcoming albums that I’m eagerly anticipating the release of. November and December can’t come soon enough! 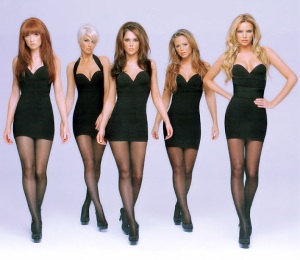 I’ve really been digging Girls Aloud’s Tangled Up album. To refresh your memories, here’s the Wikipedia scoop on the Girls:

Girls Aloud are a British girl group created by ITV1 talent show Popstars: The Rivals in 2002. The group, consisting of Cheryl Cole (née Tweedy), Nadine Coyle, Sarah Harding, Nicola Roberts and Kimberley Walsh, has become one of the most successful British pop groups of the decade, with a record-breaking sixteen consecutive Top 10 singles (including three number ones), four platinum albums (including a number one) and record sales in excess of 4 million in the UK. They are Smash Hits poll winners, have won a TMF Award and have been nominated for a BRIT Award.

What Wikipedia neglects to mention is how fabulously poptastic Girls Aloud are. They don’t try to be groundbreaking or anything, but that’s exactly why they’re great: they (and mostly their producers) create absolutely solid, good old fashioned pop.

I’ve been a fan for a relatively short while but it doesn’t take very long to hear how fun and well-crafted their tunes are. And in Tangled Up, you can hear how their sound has matured over the years. It’s not a drastic change, but there’s a real sense that the Girls have embraced some new sounds since their last studio album, 2005’s excellent Chemistry (which I must say is my favorite Girls Aloud album!).

On my first listen to Tangled Up I wasn’t feeling it so much. It all sounded a bit ‘same-y’. Listening to it a second time, however, I found myself really liking what I was hearing. There’s nothing that quite stands out and screams ‘smash single!’ like in their previous albums, which sounds like it would be a problem. Not so. They all just work better together as an album than as single releases.

We start off with the sparkly, mid-tempo, vocoder-sprinkled ‘Call The Shots’, the second single released from Tangled Up. It’s a bit trance-y, a bit dance-y, and really quite lovely, especially the ‘I’ve seen life flow by like a river’ bit. ‘Close To Love’ follows with some guitars peeking in between the synth lines and a killer chorus embedding itself into your subconscious. I particularly like the bit at the end where the Girls show some ‘tude and order suitors (I think; I’ll have to have a look at the lyrics!) to ‘back off’ and keep their ‘hands off’.

I personally love ‘Sexy! No No No’. From the vocoded intro to the grinding synths and guitars of the chorus, this song is too cool for school. A beefy synth line winds its way through lyrics demanding ‘damn good lovin’ and reminding us that ‘from top to bottom I’m a woman, sunshine’, just in case we hadn’t noticed. This was one of my songs of the summer, and it still stands up as a solid track on the album.

From sexy to shipwrecks – only on a Girls Aloud album! ‘Girl Overboard’ has some neat effects (like that deep crashing sound) and a great beat, topped by a nice break around 2:42 where we just hear a guitar strumming under the Girls’ vocals. The first highlight of the album comes next in the form of ‘Can’t Speak French,’ a wonderful little tune with a great bassline and clap-along drumbeat. With some nice guitar work and that fantastic rhythm, ‘Can’t Speak French’ finds the Girls in a low-key but still fabulous mood.

The next song, ‘Black Jacks,’ had me going ‘D’oh!’ – this track has an excellent melody, chorus, and instrumentation, but then they go and mess it up with that shouting! ‘New York something something, blah blah if you keep it real’ – it just sounds silly and detracts from the song, at least to me. But, like I said, it’s got everything else going for it, so I just sort of block out the shouts.

‘Control Of The Knife’, thankfully, has no shouting. There’s some neat production and instrumentation here, lots of great sounds, and even some reggae-ish hits and horns. The vocoder, last heard in ‘Sexy! No No No’, turns up again here.

If the next song, ‘Fling,’ doesn’t become a single at some point I shall be very cross. A fat, dirty bassline and grinding guitars and synths similar to those on ‘Sexy! No No No’ chug alongside the Girls singing some delicious lyrics about how they just want a ‘bit of ding-a-ling’. Classy! This is a fun track and the second highlight of Tangled Up.

‘What You Crying For’ comes next and is really rather average, but keeps the upbeat groove of the album going. Guitars sound the beginning of ‘I’m Falling’, a neat drum’n’bass-y track with lyrics dripping with attitude – ‘and all the rest can go blow.’ Oh my! We near the close of the album with ‘Damn,’ which kind of reminds me of ‘Real Life’ (from What Will The Neighbours Say), except not nearly as good. Like ‘What You Crying For’, it’s kind of average, but not exactly bad.

‘Crocodile Tears’ finds the Girls in a moody moment, supported by strumming guitars, light synths, a mid-tempo beat, and some nice melancholy vocalizing. A nice close to Tangled Up.

Check it out at 7Digital, iTunes, or your fave music shop.